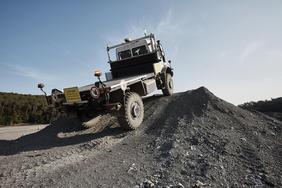 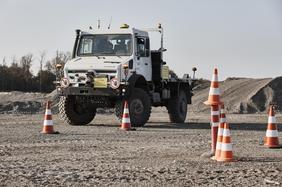 This week, the final demonstrations of our projects AMMCOA and AutoCV took place.

At the AutoCV demonstration, several tasks of our Unimog-robot were shown on the "Zentrale Abfallwirtschaft Kaiserslautern (ZAK)"-area in presence of the minister of economics of Rhineland-Palatinate, Dr. Volker Wissing. Within these was the autonomous following of a path, limited by traffic cones, the interaction with a backhoe loader and the drive through rough terrain. The successful event was also covered by the media, like the SWR:

and at "Wir im Landkreis":

At the final demonstration of the AMMCOA-project, the assisted driving capabilities of the drums rollers, that were automated at the RRLab, was presented. Additionally, the interaction of several drum rollers during automated street paving was demonstrated, as can be seen here.